Development aiming for the best quality

As soon as you think you achieved the best quality, it will no longer be the best. With this idea in mind, all of our researchers endeavor to develop products to a higher level. Under this development philosophy, we carefully select raw ingredients based on the latest information and create excellent products that are safe, effective and usable. By implementing effectiveness tests to confirm functionality as necessary, we are further developing reliable products. We also have an accurate grasp of the market allowing us to plan and offer products demanded by customers, which leads to high customer satisfaction and the development of products that will be repeatedly selected by customers. In product development, all of our researchers discuss their ideas day and night, never content with existing products, endeavoring to create products that are not bound by existing concepts. Such effort was brought about by seeking the best quality.

Not bound by existing cosmetic concepts, we have developed new formulations. Besides cream-in-gel, which is cream inside a beauty gel, we develop unique formulations that are not restricted by existing products, such as liquid nano cream, in which moisturizing cream is liquefied using high-pressure emulsification technology. 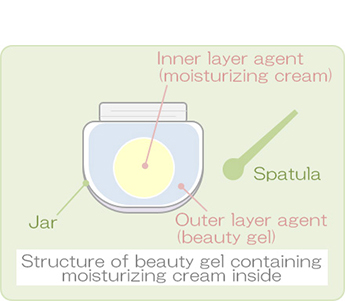 Cream-in-gel was created using a special formula in which moisturizing cream is floated in the beauty gel. We sought functionality in addition to a beautiful dessert-like look. Two different functions of moisturizing cream and beauty gel can be experienced in one product. With cream-in-gel, two types of formulations are independently encapsulated, so adding color to the outer layer and adding scent only to the inner layer was possible. In December of 2014, Geol Chemical acquired patents for cream-in-gel for its functionality as a product as well as its production technology. (Patent No. 5670031) 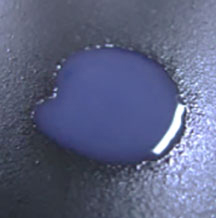 Liquid nano cream is a new type of cream that is completed through a repeated process where the product is agitated at high speed using a homo-mixer and emulsified with high pressure. This liquid cream was created by reducing the oil contained in the cream to nano size, the ultimately minimum-possible emulsification size, and dispersing it in the product. Liquid nano cream is a new skincare product that does not fit into any category. The cream does not feel greasy and permeates into the skin. Its impact will upend the existing concept of moisturizing cream.

Without being bound by existing cosmetic conventions, we dared to develop raw cosmetic ingredients. We have so far developed many unique beauty ingredients that cannot be imitated by competitors, such as mushroom mycelium culture extract, arrowroot isoflavone and gold colloid. With cosmetic ingredients and formulation technology backed by our long years of fundamental research, we work hard day and night so that customers can experience a thrill they cannot feel with other existing products. 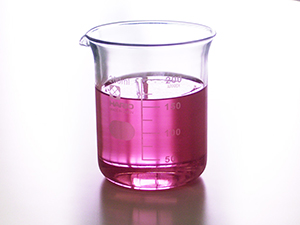 When gold is reduced to nano-size, it turns into red Gold Colloid. At Geol Chemical, we began sales of an emulsion featuring gold colloid that was produced by our company when it was first established. Created by Geol Chemical, Gold Colloid has been in continuous development, and features excellent stability and coloration that outclasses other companies. Gold Colloid also possesses a semi-permanent antioxidant effect that detoxifies active oxygen through a metal-catalyst.

When natural mushrooms are cultured in a bacteria-free environment, they develop into a state called mycelium. We have conducted exploratory research on beauty ingredients from mycelium cultures. Development of cosmetic ingredients using mushrooms is extremely rare but has been gaining attention in the industry. From exploratory research using over 200 kinds of mushrooms, we have identified promising ingredients for cosmetic use from some of the cultures and presented our findings at academic conferences and in academic journals.

We discovered that a culture of daedalea dickinsii possesses powerful antioxidant and skin brightening effects. Later on, these effects were discovered to be caused by an ingredient called daedalin A, which is produced by daedalea dickinsii under a certain culture environment. Daedalin A is a new substance similar to vitamin E, but with even better active oxygen removal and melanin production inhibition than existing skin brighteners, and is gaining academic attention. We developed Daedalea Extract MB as a culture of daedalea dickinsii, which contains an abundance of daedalin A.
This type of Reishi mushroom has been appreciated in various countries, including Japan. It is a rare type of a mushroom that is endemic to Japan. The extract from the mycelium culture of ganoderma neojaponicum possesses a powerful anti-inflammatory effect. Our research made it clear that this anti-inflammatory substance is a compound of multiple triterpenes. When this substance is used as a cosmetic ingredient, an improvement for skin roughness can be expected.

Arrowroot can become an ingredient for an herbal medicine called Kakkonto and its medicinal effect is from arrowroot isoflavone. Other food that contains isoflavone include soybeans, but the amount of isoflavone contained in arrowroot is more than that found in soybeans. We have succeeded in extracting an extract that contains an abundance of arrowroot isoflavone (6-geranyl-coumestrol), which possesses excellent beauty effects, including anti-inflammatory, inhibition of tyrosinase, anti-oxidation and anti-bacterial effects, from the discarded fibers from the Yoshinokuzu (a type of starch) production process. 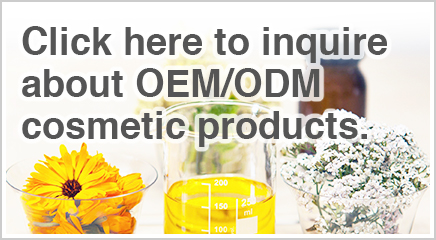